How Google got its simple but colorful and beautiful logo? Who designed it and after how many iterations was the logo finalized? What was the original intention from Google founders?

In Wired Magazine, an article titled, How Google Got Its Colorful Logo by Sonia Zjawinski, published back in February 2008 on this subject. For those interested in branding, how big companies go about finalizing their logo, this is an interesting case. 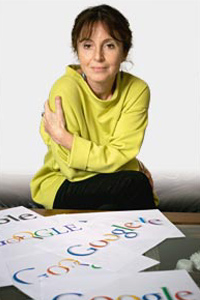 As we know, Google’s logo is one of the most famous. Within short few years this logo has become as recognizable as Nike’s, Cocacola or that of Adidas. Obviously there were few steps few this current logo was chosen. Ruth Kedar, a graphic designer originally from Brazil who studied in Israel and later moved to USA is the woman who designed Google logo. Learn more about Ruth Kedar via Wikipedia.

This is what Ruth shares in an interview:

“I was teaching design at Stanford University in 1999 when I was introduced to Larry Page and Sergei Brin by a mutual friend at Stanford. They were looking at designers to design their logo and website and I was asked to present them with some preliminary design ideas. They liked my approach and design style and I was hired to design both.

Google wanted to create a unique logo that would clearly differentiate them from the other search players at the time (Yahoo, Excite, HotBot, LookSmart and Lycos), as well as embody their unique vision. These other players were commercial portals first, and search engines second. Google wanted to convey that it was as a search provider first and foremost. It offered fast, comprehensive, and above all trustworthy search results. It was innovative, algorithmically complex yet incredibly simple to use. Furthermore, Google as a brand should repudiate all things corporate, conventional or complacent.

Based on these guidelines there were many design iterations, and many directions were explored. At every meeting we managed to better reconcile the vision and its visual expression leading to the final design.”

Regarding how the logo evolved, the following text is quoted from Sonia Zjawinski’s article ( published at Wired Magazine):

In total there were about 8 iterations which finally gave birth to present Google logo.

“It was very clear from the very beginning that they wanted to go with a logotype as opposed to just a logo,” Kedar says. With this first version, Kedar wanted to keep the majority of the text untouched so the legibility was still intact, while adding some playfulness by bringing primary colors and two-dimensionality to the Os. The pattern here was used to visually imply that something goes on ad infinitum. According to Kedar, “Brin and Page liked this because it looks a bit like a Chinese finger trap.”

Instead of working with the two Os and creating something larger in terms of space and pattern, Kedar modified just one letter to make it multidimensional. This design ended up being part of the basis for the multiple Os at the bottom of Google’s search results page. The cross hairs reference both target and precision. Brin and Page wanted to clearly differentiate Google from competing search engines and convey that the service was a search provider first and foremost, with an algorithmically complex yet simple-to-use application, Kedar says.

The interlocking rings are a metaphor for far-reaching searches that involve different cultures and different countries. “It’s funky and clunky, and those were the things we were exploring at the time,” she says.

All the letters in this design are uppercase, giving it a more corporate and solid feel, but by changing the letters’ sizes and adding colors, Kedar keeps the logo playful. The colors don’t appear in rainbow order, so things aren’t quite the way you’d expect them to be. The design’s fault was that it was too busy. “They liked the magnifying glass and the cross hairs, but not all at once,” Kedar says.

This is a further iteration of the previous design, but Kedar gets rid of the cross hairs and the ability to see through the magnifying glass. She adds a smiling mouth, though, to represent “happy” results and a positive search experience. “At the beginning and end, the letters are the same color, but in between, all kinds of things happen,” Kedar says, possibly referencing the different routes your search can take as a result of the gaggle of information Google returns.

This design was close to Brin’s original concept, but by using the Leawood font, shadowing and shading, Kedar gets some dimensionality into the logo as the letters go through thick and thin stages. The logo floats on the search page, which they knew was going to be clean and mostly white. This iteration also started a discussion regarding how many colors Google wanted and what kind of color progression would work.

“This is where we started simplifying,” Kedar explains. “The idea was, ‘Can we create the sense of playfulness without having recognizable or identifiable objects that are going to end up limiting us?'” By taking out the magnifying glass, Kedar opens up the logo to signify that Google can become much more than just a search engine. By playing with the angles and colors of the letters, she tries to make clear that Google isn’t a square corporation.

“There were a lot of different color iterations,” Kedar says. “We ended up with the primary colors, but instead of having the pattern go in order, we put a secondary color on the L, which brought back the idea that Google doesn’t follow the rules.”

About the final form of the Logo, this is what Ruth said,

“In the end this particular logo was selected because it reached its goal in many levels:

* It was playful and deceptively simple. The design subtle as to look almost non-designed, the reading effortless. The colors evoke memories of child play, but deftly stray from the color wheel strictures so as to hint to the inherent element of serendipity creeping into any search results page and the irreverance and boldness of the “I am feeling lucky” link. The texture and shading of each letter is done in an unobtrusive way resulting in lifting it from the page while giving it both weight and lightness. It is solid but there is also an ethereal quality to it.

* Times-Roman was the font of choice for the web at that time, while sans-serif fonts were the darling of the printed world. I wanted the readability of a serifed font, but looked for a typeface that had the same qualities we were looking for – subtly sophisticated, but with some humor and irreverence . The chosen typeface is a based on Catull, an old style serif typeface. Catull borrows elements from traditional writing instruments such as the quill and the chisel with a modern twist. Search, by nature, is an activity that requires we look into the past. Therefore Catull’s historical ties seemed appropriate, as did the bridging between the old analog world and the new emerging digital era.

* Visually, there were two main schools of thought at the time: those wanting to emulate the conventional non-web giants such as Sun and SGI (bold all-caps sans-serifed fonts), and those who viewed the irreverence of Yahoo’s non-designed approach as “the look” for the new medium. This design managed to break with the existing conventions landing Google with the unique visual expression it was looking for.”

Collection of your Personal Information

Codeboxr collects personally identifiable information, such as your e-mail address, name, home or work address or telephone number only upon your submission. Codeboxr also collects anonymous demographic information, which is not unique to you, such as your ZIP code, age, gender, preferences, interests and favorites. There is also information about your computer hardware and software that is automatically collected by Codeboxr. This information can include: your IP address, browser type, domain names, access times and referring Web site addresses. This information is used by Codeboxr for the operation of the service, to maintain quality of the service, and to provide general statistics regarding use of the Codeboxr Web site only. Please keep in mind that if you directly disclose personally identifiable information or personally sensitive data through Codeboxr public message boards, this information may be collected and used by others. Note: Codeboxr does not read any of your private online communications. Codeboxr encourages you to review the privacy statements of Web sites you choose to link to from Codeboxr so that you can understand how those Web sites collect, use and share your information. Codeboxr is not responsible for the privacy statements or other content on Web sites outside of the Codeboxr and Codeboxr family of Web sites.

Use of your Personal Information

Codeboxr collects and uses your personal information to operate the Codeboxr Web site and deliver the services you have requested. Codeboxr also uses your personally identifiable information to inform you of other products or services available from Codeboxr and its affiliates. Codeboxr may also contact you via surveys to conduct research about your opinion of current services or of potential new services that may be offered. Codeboxr does not sell, rent or lease its customer lists to third parties. Codeboxr may, from time to time, contact you on behalf of external business partners about a particular offering that may be of interest to you. In those cases, your unique personally identifiable information (e-mail, name, address, telephone number) is not transferred to the third party. Codeboxr Web sites will disclose your personal information, without notice, only if required to do so by law or in the good faith belief that such action is necessary to: (a) conform to the edicts of the law or comply with legal process served on Codeboxr or the site; (b) protect and defend the rights or property of Codeboxr; and, (c) act under exigent circumstances to protect the personal safety of users of Codeboxr, or the public.

Changes to this Statement

Codeboxr will occasionally update this Statement of Privacy to reflect company and customer feedback. Codeboxr encourages you to periodically review this Statement to be informed of how Codeboxr is protecting your information.

Codeboxr welcomes your comment regarding this Statement of Privacy. If you believe that Codeboxr has not adhered to this Statement, please contact Codeboxr, sabuj at Codeboxr.com We will use commercially reasonable efforts to promptly determine and remedy the problem.